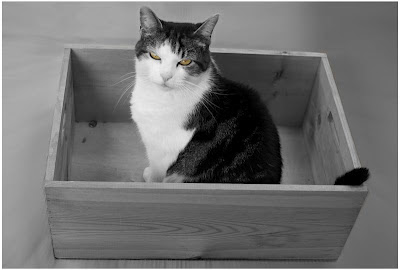 In 1935, Erwin Schrodinger tried to make a point with a metaphorical cat in a box. He was tackling what he saw to be an absurdity of the Copenhagen theory at that time that suggested the act of the observer influenced the behaviour of subatomic particles. This relates to the concept that something like a photon is a wave until it’s observed, at which point it becomes a particle.
Now Mr Schrodinger really didn’t buy into this theory so he came up with the wonderful thought experiment of Schrondinger’s Cat. For those who aren’t familiar with this, in this example illustrates the duality of particles, it goes like this:
The cat is in a sealed box. There is also capsule which, depending on a random trigger, will release poison into the box. Until the box is opened, the cat is in limbo, both alive and dead (a wave). When we open the box and observe the cat it becomes either very alive, or a very dead cat.
Before anyone writes in to complain about cruelty to the animals, just to point out this was an entirely a thought experiment!
Many have problems with this theory including Einstein himself. You can see why. If you think this through does that mean as you are walking down the street, it dissolves into a fuzzy state of matter behind you until it’s observed again? You can see why a lot of people weren’t very happy about this theory. However, from Schrodinger’s very famous cat, came the interpretation of the many worlds theory... parallel worlds in other words. That will be a subject of another blog, but for now, and before you dismiss this all as madness, the super-positioning of matter (wave) and and also being a particle at the same time, in two places at once, has been demonstrated in the lab. This is real... it happens... think about the profound implications as you watch this TED video.