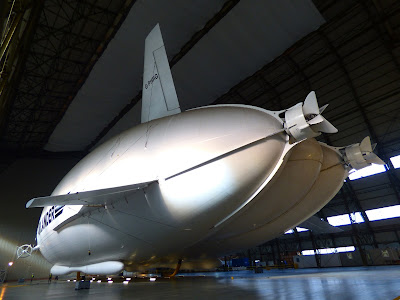 In the 1920s, when commercial aviation was still in its infancy, the main method of crossing the Atlantic Ocean was by steamship and ocean liner. However, there was also a luxurious alternative…the airship.

The mention of airships, for many, will conjure up an image of a Zeppelin, the archetypal airship with its elegant streamlined design. In 1929 the Graf Zeppelin managed to circumnavigate the globe. This wonderfully evocative video captures the end of its journey in New York.


Unfortunately, the abiding association that most people have with airships of that era, is the Hindenburg, which in 1939, and filled with hydrogen, was struck by lightning, causing the airship to burst into flames and crash with a terrible loss of life. That and other terrible crashes like the British R101, destroyed those early dreams of airships as a safe form of travel.

It was many years later, when Goodyear, in partnership with Zeppelin, revitalised the airship’s image with their famous Goodyear Blimp. Having learnt the lessons of the inherently dangerous hydrogen filled vessels of the past, this new vessel used an inert gas  – Helium. It was a design that soon proved to be a worldwide success, and even today, a Goodyear Blimp in the sky, will still turn heads. However, as successful as these airships have been, they are only a fraction of the size of the original Zeppelins, certainly far too small for more serious applications.

That situation now looks set to change with latest developments hybrid airship design. The Long Endurance Multi-Intelligence Vehicle (LEMV), was developed by Northrop Grumman for surveillance and reconnaissance missions for the US Army. With a carbon fibre hull, LEMV was designed for extended flight (21 days), can fly at 90 mph, and hold position at 20,000 feet. However, the company wasn’t able to be completed the ship in the timeframe necessary, and with inevitable cutbacks, the project was cancelled.

It was at this point that Hybrid Air-Vehicles, a UK based company, came to the rescue and took over the project. LEMV has now been reborn as the Airlander 10. For some time they have been painstakingly reconstructing the vehicle at Cardington Airfield, north of London. Within the original vast hangar of the R101, the ship has slowly been taking shape. And now at last their handwork is coming to fruition and Airlander 10 will soon be taking her maiden voyage.

Although there is still a potential military use for this vehicle, the company’s focus seems to be on civilian applications, including tourism. Capable of carrying up to 10 tonnes, the ship is currently fitted with a viewing deck for potential customers. Apparently the Guinness Book of Records is also set to acknowledge the Airlander 10 as the current biggest flying vehicle in the world. But the ambitions don’t stop there. If the Airlander 10 proves successful, plans have already been proposed for the Airlander 100, an even larger craft that could carry up to a 100 tons.

What seems almost certain, is that with the launch of the Airlander 10, a new chapter in aviation is about to begin. Certainly, the potential use of this first of the next generation of hybrid airships, seems endless. However, my vote would go towards tourism. For example can you imagine, that whilst sipping champagne and enjoying canopies within the observation deck of an Airlander 10, gazing out at the Northern Lights dancing over the landscape of a frozen Icelandic landscape far below you? Sign me up now! And what better way to recapture that romantic spirit of travel, first embodied Graf Zeppelin when it circumnavigated the world, for current and future, generations?

I wish Hybrid Air-Vehicles, every success with her maiden voyage.