I have had many pens in my life, but none as special as the one my partner, Karen, gave me last Christmas. And choosing that pen was an experience worthy of Harry Potter selecting his wand at Ollivanders.

As an author I use all manner of biros from all the nooks and crannies of our house. Now that's fine for a while, but with something like an extended book signing, my keyboard evolved fingers start to quickly cramp and my signature becomes reduced to a barely decipherable scrawl. What I needed was a good pen, but not just any pen, it had to be the stuff of legend...the sort of pen that presidents would sign treaties with.

My wonderful partner Karen, knowing my plight and understanding what a special pen would mean to me as an author, took me to a pen shop that I could only describe as the writing equivalent of Ollivanders in Diagon Alley, where Harry Potter chose his wand. However, the shop in question wasn't in Diagon Alley, but was called Pen Plus, located in my home city of dreaming spires, Oxford.

So it was that one bright winter's morning, Karen took me to find me the perfect writing implement. However, any notions I had that this would be a rapid and easy decision were soon dispelled. You see it turns out that choosing the pen, the one that you will keep forever, is a serious business. Just like choosing a wand.

The one thing that I knew in advance of our trip is that although I adore fountain pens, they really aren't ideal when it comes to signing books. You see the texture of the printed page isn't perfect for writing on. For ease of use and versatility there could only be one choice for me - a rollerball pen. Also I knew from personal experience that a slimline design becomes rapidly uncomfortable to hold, when used for any length of time. Naively I thought knowing these two bits of information would make choosing the pen really straight forward, right? I mean how much choice can there be? The answer was of course, lots and lots and lots.

Luckily to aid me in my quest, as Harry was guided by Mr Ollivanders to his perfect wand, the female assistant had the same encyclopaedic knowledge about the pens contained in her emporium. Let's call her Ms Ollivanders...

The first decision was my taste in style and within moments I’d tried several beautiful pens. However, unbeknown to me, Ms Ollivanders was watching intently how I actually held the pen. 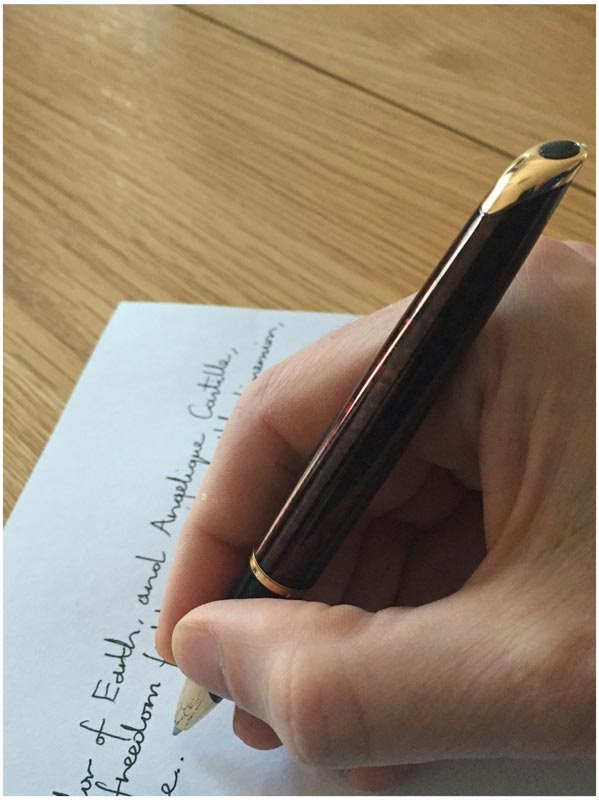 A small smile curled the corner of her mouth. "Ah, I see that sir is a pen tip holder."

"Oh yes indeed. And how does the balance of the pen feel?"

Or maybe wands too, I thought to myself.

So I started to try pens for balance, a first in my life, and quickly realised she was right. Any decision based simply on style had been well and truly pushed aside. Now it was all about finding the pen that would be the perfect writing tool. But it was at this point that Ms Ollivanders gave me the look that told me she knew the pen for me, probably the same sort of look that her namesake had given Harry Potter when he’d identified the perfect wand for him — one made of holly with a Phoenix feather core...

The assistant placed before me on the counter (accompanied in my head by an angelic choir) a carene amber Waterman pen with gold trim. Despite never normally going for anything gold, this was a pen of exquisite beauty and craftsmanship. But it was when I held the Waterman and wrote with it, I knew, I really knew…

This pen felt like an extension of my writing soul. And I knew right away this wasn't just a pen for signings, this would be the pen I would use to capture those first sparks of a new idea for a book in one of my notebooks, the pen I would reach for when a bolt of creative lightning hit me. It seemed I had chosen my pen, or maybe it was that the pen had chosen me.

And so one Christmas morning, the pen and I were reunited. Who knows what adventures we will have together, but one thing is for sure - I will never see choosing a pen in the same light ever again after my trip to that magical emporium nestling among the dreaming spires.