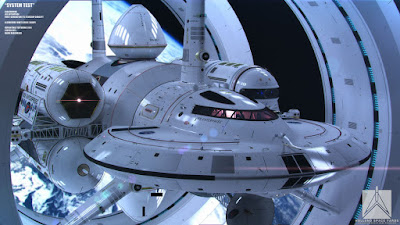 I don’t know about you, but when I watched the film Interstellar, for someone who grew up during the space race, it pulled at my wannabe astronaut’s soul. However, until now, journeying to the stars is something that we have only be able to do in science fiction. However, thanks to NASA’s Eagleworks team’s work, there’s a chance that one day we may be able to achieve this long held dream. Enter stage left, the EmDrive.

As we all all know, light speed is meant to be the speed limit. After all Einstein told us it was impossible to exceed. However, someone needs to tell the scientists working on the EmDrive, this.

The EmDrive, invented by English researcher Roger Shawye, is a microwave chamber that bounces waves back and forth to produce thrust. However, a strange thing is that it appears to produce more thrust that it should. But how can that be possible?

At night in a room with the light on, if you gaze out of the window, you will see your own reflection gazing back at you…unless maybe you are a vampire!

You have probably never given this a second thought. After all the window is a partly reflective surface, bouncing the light back at you. Simple. This works fine in principle if one intuitively think of light as rays…some get through the glass, some bounce back. And it was this exactly this idea that gave Sir Isaac Newton, who thought light was made of particles, a severe headache.

Newton grappled with this concept, trying to explain why a particular particle was reflected or travelled on through the glass. His best explanation was that it was to do with flaws in the glass itself. And in this he was wrong. The actual explanation has everything to do with the far weirder world of quantum mechanics…

It turns out that the glass is in fact a sophisticated quantum device called a beam splitter. And of course at the quantum level, the world as we know it, behaves very, very strangely.

Photons of light are in a superposition state (waves). As each photon of light interacts with the atoms of the glass, there is a probability of it passing through…or not. For those photons that are detected, they become entangled with the cloud of atoms that make up the glass. Also, as the glass thickness increases, the greater the chance of entanglement, the greater the probability, i.e. creating a reflection being created as its not just happening on the surface of the glass.

So the next time you gaze out of a window and see you own reflection, remember the glass is actually a sophisticated quantum device called a beam splitter, capturing some of the photons like so many flies in its web of sticky atoms. Unfortunately, I’m not quite sure what the quantum explanation is for a vampire’s lack of a reflection, although would be an interesting discussion in its own right!

A Cat, a Box and a Riddle – Schrodinger’s Cat:
http://therealnickcook.blogspot.co.uk/2012/06/cat-box-and-riddle-schrodingers-cat.html

Higgs Boson – The Treacle of the Universe
http://therealnickcook.blogspot.co.uk/2012/01/higgs-boson-treacle-of-universe.html

This week on the 10th January, 2016, a death happened that created ripples right around the world and caused many people, often much to their own surprise, to find in tears their eyes at the news. So how did a lad who grew up in South London, turn into music legend David Bowie that ended up touching so many hearts in this way?

For me Bowie’s music was always in the background during what I would call my formative years. From the end of the 60s and into the 70s, his music was constantly on the radio and TV. But for me it was Goodbye Major Tom, as I suspect for many people who grew up during the Space Race, that really struck a chord. Back when nearly every child dreamt of being an astronaut, Bowie’s genius somehow captured that wonder of space exploration, something that it’s difficult to put into words, and created a song that pulled at our souls about an astronaut who broke free of his bonds with Earth never to return. And of course it is this song that astronaut Chris Hadfield, with Bowie’s blessing, immortalised with a haunting rendition on the International Space Station, a performance that is now bound to take on even more significance with Bowie’s death.

After this song the next time his music really surfaced again in my life was when I was at art school during the early 80s. Back then the album that was played at every party was Let’s Dance...and we did!

But here’s the strange thing. If you had asked me last week what music had meant a lot to me back then, I would have probably singled out prog rock bands like Pink Floyd and Yes. So you see when I heard about his death via a BBC app that flashed up the news on my phone’s screen, I was saddened, shocked even because he was only 69 and deserved so many more years than he had on this planet, but tears, no. That was until today…

During my early mornings I always try to put aside some time to read, a time to get some headspace, a time to breathe. But this morning was different. I put on his album, the Best of Bowie, 69-74. And within three songs I was captured completely by it, doing nothing else, emotions bubbling up through me until I found tears in my own eyes. You see it wasn’t until that moment that I realised just how woven into my own life Bowie’s music had been. And listening to it felt like looking back at my own personal history, my life, and reliving moments long forgotten moments. Maybe that’s the reason that so many people found tears in their eyes on hearing of his death this week. It felt like the loss of friend who's always been there for you.

But for me Bowie represents an artist that truly made the most of his time upon this earth and his work will live on forever in the human collective consciousness. His work has certainly left footprints in the hearts of many, including mine.

And I can think of no better tribute that to listen to Chris Hadfield's haunting cover of Major Tom performed onboard the ISS.


Humanity – The Overview from Space:
http://therealnickcook.blogspot.co.uk/2014/07/overview.html

After my last blog in early December, that closing month turned out to be an epic one in space flight. Not only did British school children suddenly have somebody to aspire to be, namely our very own Tim Peake who was launched on a Soyuz rocket on the 15th December for his six month mission onboard the International Space Station, but there was also a major development in rocket technology that month that could have major implications for the future of space exploration.

In November, Blue Origin, the private space company, succeeded in the controlled landing of a rocket vertically. As impressive as this was, what then occurred in December, it could be argued, was even more incredible.

SpaceX succeeded where nobody else ever has before, in landing the first stage of an orbital rocket using its rockets just like they used to all those great old black and white sci-fi films. Not only was this an incredible achievement, it also potentially opens up a new era for humankind.

Getting into space has always been an expensive business, so much so that our dreams of conquering space were severely hauled in from the heady days of the 60s and 70s. Back then everything seemed around the corner and nearly every child wanted to be an astronaut. But as the thrill of people walking on the moon receded, even to the point that a few claimed the whole thing was a hoax (the film Capricorn One, has a lot to answer for), the stark cost became far too apparent. Excluding the incredible expense of the Apollo research program where each launch cost in 1969 $375 million (you don’t want to know how much that would be in today’s money), the Space Shuttle was meant to be the answer. But it ended up costing $450 million to launch per mission and despite being an astonishing piece of engineering, there were serious reliability issues surrounding it. No wonder our grand space exploration dreams have faded so far.

However, against this background, SpaceX’s achievement is nothing short of astonishing. Their cost per mission of their Falcon 9 rocket is currently $60 million per mission. The other cost is $200,000 for fuel. In other words if SpaceX cracks be able to reuse a rocket there is potentially huge cost savings with just maintenance and fuel costs to consider per launch. Elon Musk has been quoted as saying that travelling into space could become a hundred times cheaper. If that aspiration becomes a reality it’s a huge game changer in every sense and suddenly everything becomes possible.

A manned base on the moon? Why not. The asteroid belt become the new mining frontier? Maybe. And what about a crewed mission to Mars? It’s that particular target that’s Musk has got in his sights and sees reusable rockets as a step towards realising that dream. And right there is what we’ve always needed. The dreamers who dare to try.

Click on the video below to see SpaceX's historic achievement.

Our destiny is among the stars.
http://therealnickcook.blogspot.co.uk/2015/12/exploration-is-in-our-nature.html

Humanity – The Overview from Space:
http://therealnickcook.blogspot.co.uk/2014/07/overview.html