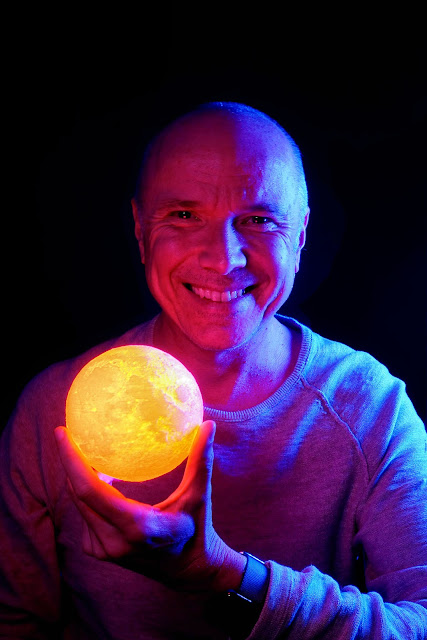 Somewhere back in the mists of time I was born in the great sprawling metropolis of London. I grew up in a family where art was always a huge influence. Tapping into this, I finished college with a fine art degree tucked into my back pocket. Faced with the prospect of actually trying to make a living from my talents, I plunged into the emerging games’ industry back in the eighties. It was a start of a long career and I produced a graphics for many of the top selling games on the early home computers, including Aliens and Enduro Racer. It’s really strange looking back at those pioneering games that look so crude now. But back then, trust me, they were considered to be cutting edge.
As the games industry exploded into the one we know today, my career went supernova with it. I worked on titles such as XCom, and set up two studios which produced Warzone 2100, and the Conflict: Desert Storm series. I think I probably have somewhere in the region of forty published titles to my name. There are so many memories, both highs and lows, and I wouldn't have missed a moment of it.
As great as the games industry is, a little voice kept nagging inside me and at the end of 2006, I finally gave in to it and walked out of my games studio for the last time. I was at last ready to pursue my other passion as a full time career – writing.
So on a chilly December morning, I started my first novel. Many years later I completed my first trilogy, Cloud Riders, a tale set in Tornado Alley and centres on a family of storm chasers, for whom Twisters are a way of life. Jake loses his dad who flies into a twister and dies. But then all the tornadoes stop dead and with the change in weather systems, massive droughts hit the planet. A year later a huge tornado hits and out of it flies...(makes you wait a little bit for dramatic tension buildup)...an airship!

I'm now working on a trilogy that directly follows on from Cloud Riders, called Fractured Light. All I will reveal about Fractured Light for the time being is this first line from the blurb... Watch the darkness because the shadows are coming for you. You have been warned!
I've many interests from space exploration and astronomy, to walking the long distance footpaths of England. I’ve even soloed in a light aircraft, an experience I tapped into now for Cloud Riders. I've always loved to cook, but then you'd expect it with my surname.

My writing reflects in many ways my own curiosity about the world around me and where I love let my imagination run riot to pose the question, what if?
To summarise my own core life philosophy, always pursue your dreams, but always remember that the journey is half the fun.
– Nick Cook